Well, I thought I'd seen it all. A small microlight with a caged in propellor arrived at the airfield last week, closely followed by a van covered in french sign writing. The ground crew removed a mysterious large brown box from the back of the van, from which we could have sworn we heard.... clucking.
Chris Moullec has reared his Canada geese from birth - they think of him as their father, and so fly behind his microlight as naturally as ducklings paddle after their mother. After a couple of circuits, the geese were released from their temporary home, and they quickly flapped up to join Father Goose, eventually flying in formation with him. An impressive, if not somewhat surreal display that Chris takes all over Europe. 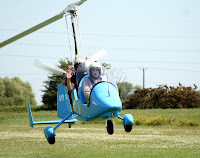 Another typical Monday morning, stuck in a hot office in front of my computer. Thank goodness for John, the gyrocopter pilot, who popped his head in to offer me a spin to cool down.
The Gyrocopter is a sexy little machine - it looks a bit like a cross between a helicopter and a microlight but unlike a helicopter, it's the engine & propeller providing the forward thrust to produce airflow over the rotor, causing it to spin and the blades to produce lift.
The gyro can fly slower and lower than small aircraft, so the views are fantastic. I think I might be a convert....
Posted by Annac at 06:27 No comments:

Email ThisBlogThis!Share to TwitterShare to FacebookShare to Pinterest
Labels: gyrocopter

ay have spotted the Goodyear Blimp floating above London recently. It's been pootling about trying to imprint the Goodyear brand onto the general consciousness, as well as filming football matches and giving VIP flights.
As we were neighbours on the airfield for three weeks, the Blimp crew very kindly offered me a ride. I had been up in the Stella Artois Zeppelin which was based on the airfield a couple of years back, so thought I knew what to expect, but was taken by surprise by the maneuvrability of the blimp, which is significantly smaller than a zeppelin. Mike, my pilot decided to do a couple of low swoops around the airfield - at one point it felt like we were heading straight for the ground and I felt the need to hold onto the back of my seat to make sure I didn't fall out!
Then we levelled up and went for a slightly more relaxing cruise around the local area. I know the Thames estuary very well from the air, having flown around it in a microlight on numerous occasions. But the Blimp can fly lower and slower, giving me a very different perspective on the world below. The lorry parks near the Dartford Crossing struck me as particularly photogenic, as did the shadow of the Blimp casting itself over the fields.

I spend so much of my time on the ground watching my husband Ian taking people hang gliding - it's not often I get to go up alongside him. But this week I was lucky, and so on a perfect sunny windless day we took to the sky.
I'm a little bit nervous as we get strapped in ready to go - this is after all, just a wing that I'm attaching myself too. But I remind myself of how many years Ian has been hang gliding - more than a quarter of a century -, and the small second mortgage he took out to buy the best hang glider in the business, and I feel a bit calmer. We have a tow line attaching us to the back of a microlight plane which is going to tow us up. As the 'all out' signal is called, and the microlight starts to pull away, my heart is racing but within seconds we are airbourne and there is so much to take in that my nerves fall away.

We are gaining height very quickly as we are towed up.

Once we get up to 2000 feet, Ian releases away from the tow rope, and it's just me and him, and the birds for company.
We can see up river towards London, and downriver towards the coast. It's rather surreal looking down over the M25 looking at the queuing traffic like a line of ants. It's amazingly quiet, and we can talk to each other all the time. We soar and glide for around 15 minutes before gently making our way back to the ground for a smooth landing.
'I don't remember agreeing to this in the wedding vows...'
Posted by Annac at 23:37 2 comments:

We always have lots of people to fly on a Saturday afternoon, the only time when City airport allows small planes into its airspace, so I'd been waiting years for my chance to fly up to the Dome and back with Ian. One afternoon in September last year, I was in luck. It was a sunny day, but windy - not too windy for Ian to fly, but too windy for his student who was booked for a lesson. His loss was my gain, and we jumped in for spontaneous flight as far into central London as is possible in a microlight. There are no guaruntees - City airport will only let you in if they are 100% happy that it is safe to do so, but we were in luck.
Flying up river past City airport, you can see Greenwich over to the left, and Canary Wharf on the right. You could almost wave at the office workers, had there been any sitting by a window on a Saturday afternoon. Ahead is central London, and all its landmarks twinkling in the late afternoon sun.
Ian doesn't get to enjoy the views quite as much as I do - he is continually scanning the sky and the ground, making sure he knows where he could land in this built up area in the unlikely event of an engine failure (Greenwich park, I wonder? That would give the picknickers something to write home about. City airport is more likely, is the sensible reply)
I would give my right arm to carry up river passed the City and the Houses of Parliament, which I can see in the distance, but for now will have to be satisfied with an exhilarating couple of spins around the Dome before heading back up the estuary to Essex.
Posted by Annac at 05:45 No comments:

Visitors to the airfield often say to me, 'I want to learn to fly a microlight'. I'll say ...'one of these?' pointed at the C2 (featured above) which resides outside our office. 'No, no', they'll reply. 'A microlight'.
A novice can be forgiven for imagining that the term microlight refers to flex wing planes - with an open cockpit and a wing developed from a hang glider wing, they do indeed look like a completely different kettle of fish to a Cessna or Piper. But the term microlight refers to any plane that is under a maximum total weight of 450kg, and designed for no more than two people.
There are two types of microlight - fixed wing, (also known as a three-axis, or an ultralight), or flex wing (sometimes called a weight-shift, or trike). In a fixed wing, the controls are the same as with conventional planes, where the pilot controls direction through the use of ailerons and rudder, and airspeed with the elevator. A flex wing is basically a beefy hang glider wing with a trike unit underneath. It is controlled in a similar way to a hang glider, using weight shift - the pilot maneuvers the craft around it's hang point, ie where the wing is joined to the trike unit.
So, what are the pros and cons of each? The fixed wing microlight has the feel of a conventional aircraft, although because of its weight it tend to be much zippier. It is less physically demanding to fly than a flex wing, and it can be more comfortable both for pilot and passenger. The flex wing however, offers that 'wind in your hair' feeling, and because of the open cockpit, it probably has the best all round visibility of any powered aircraft. Many people describe it as the difference between driving a sports car and a motorbike. Both are fun, but they have a different appeal.
The other key difference is how the weather effects flying. The fixed wing is a little more resilient in windy or rainy conditions. Unsurprisingly, it is significantly warmer! Flying flex wing during the winter is not for the faint hearted, although if you wrap up warm, and plug in your electrically heated clothing, then sunny, still winter days can be a real joy.
And of course, price is a key factor when choosing to learn to fly or buy a plane. Flex wings on average are much more affordable than fixed wing.
So, best thing to do if you are not sure is take a trial flight in both.
Posted by Annac at 07:29 No comments:

Flying to Greece in a flex wing Ian MacAdam has flown more hours that I've had hot dinners. He started his flying career taking people flying over the Victoria Falls in Zambia, before returning to England, where he currently teaches flex wing microlighting in Essex. One of his recent exploits involved flying his flex wing microlight to Greece and back. I asked him all about it...
Me - What made you want to do this trip?
Ian - I love flying with people, and flying around the local area there is always something exciting and new to discover. But sometimes, I like to take myself away on a long cross country trip, to challenge myself as a pilot and to explore new places. I had friends in Greece, and I had always promised to come and visit them - I don't think they ever believed I would actually do it!
Me - What was your biggest challenge?
Ian - Crossing the Alps was incredible, but as with any unchartered territory, you have to really be on your guard- looking out for landing fields, being extremely aware of any changes in the weather.
Me - How did you refuel? Airfields are often miles from anywhere, aren't they?
Ian - I went prepared to order taxis and stay in local hotels. But what I found incredible was the generosity and enthusiasm of the people I met on my journey. Many times, I was offered lifts, meals and even beds for the night.
Me - How difficult is it to fly from country to country from a legal point of view?
Ian - The more organised you are the better. You will need to file flight plans, and get permission in advance.
Me - And are the rules and regulations different in each country?
Ian - There are some fundamental differences, for example in Italy, microlights are not supposed to fly over 500 feet. You definitely need to mug up before you leave.
Me - What would you say to someone who was considering this trip?
Ian - Make a good plan in advance, but make sure that you leave yourself the time and space to explore.
Posted by Annac at 06:38 1 comment:

Fly2Up and Learn to Fly